We are committed to maximizing the human experience by correcting Subluxations of the spine, specifically the upper cervical spine, to allow the inborn potential of our bodies to heal ourselves.

We utilize a very specific Upper Cervical (upper neck) technique called the Blair Technique. This technique is highly specific so that we can get to the true cause of why the body is not functioning at it’s maximum potential. The major objective in the Blair technique is to keep the correction in the proper position for the longest period of time. The longer you stay in alignment, the faster your body can reverse the damage caused by the Subluxation.

The Upper Cervical Spinal Correction requires NO twisting or popping of the spine in this procedure. Instead, the correction is barely felt and is often times described as very underwhelming. The procedure consists of positioning the patient on their side and then a gentle, light force correction is made behind the patient’s earlobe, which is the location of the top two bones in the spine, called the Atlas and the Axis. 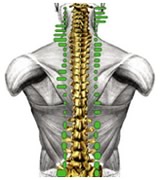 I felt immediate relief of the limited movements of my neck, like the tension was relieved. And with eight weeks I’ve been under Dr. Glocke’s care, I don’t have low back pain I was accustomed to just living with and he amazed me when he was able to relieve my severe Menstrual cramping I was experiencing at the time of one of my visits. Thank you Dr. Glocke for your knowledge and passion of the human body.